The Stone Circle Research Expedition team of Jan 2019, did not disappoint its participants. Once again the expedition delivered spectacular discoveries within the first two days. This fossilized heart about 3 times the size of a human heart was found among the stone ruins in the mountains of Mpumalanga province, South Africa. Many more fossilized body parts were found by the research team. 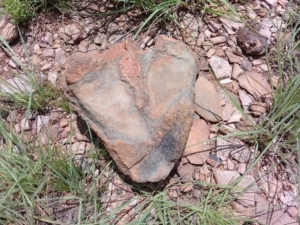 The septum and ventricles can clearly be seen, with heart muscle around the edges and below.

These discoveries are growing the pool of physical evidence of some massive event in ancient times that covered entire mountains in water and mud, trapping humans, humanoids, animals, and other creatures that defy current knowledge of our past. Could this be the Biblical Flood?

I am starting to believe that this is the case. These fossils cover an area at least 100km in diameter that we have covered in ur research expeditions. If they can be found further, which that have, we have a very serious case of evidence for the Great Flood in Southern Africa.

Since January 2018, the first Research Expedition, we have found fossils of humanoids and giants that vary in size. From about 3 times the size of modern humans; 7m, 30m, 100m and much larger beings.

This is just a small taste of the vast number of fossils discovered by myself Michael Tellinger and my team – possible unveiling one of the most important archaeological discoveries in modern history – and pointing to an ancient and mysterious past that very few can imagine.