Ancient Petrified Steak?
When I first collected this stone for the museum display in 2008, it was because of the strange hole in the rock. I consulted with a professor at Pretoria University, who wants to remain anonymous on this strange phenomenon. The conclusion was that this was a hole made by some kind of sea creature into the stone while it was under water millions of years ago. Today we know this is not the case.
After the recognition of the fossils in January 2018, it became clear that this is a petrified peace of meat with a puncture wound from an arrow, spear or other weapon – that petrified after it was cut off from the creature. Other scratch marks, gashes and reptilian skin scales can be seen on the surface and around the puncture wound.
The STONE CIRCLE MUSEUM holds hundreds of precious tools and artefacts that will change you view of the world we live in and our true ancient history.
Become a patron of the PATRON of the museum if you are passionate about researching and preserving the precious collection of artefacts. I need all the support I can get to keep the museum open and functional.
Please click this link: https://www.patreon.com/stonecirclemuseum
In unity – Keep exploring
Michael Tellinger 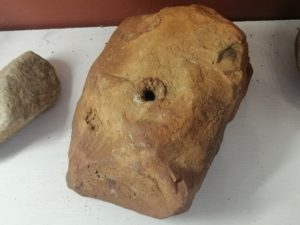